Future Challenges: What we can learn from Burma

We know a lot about Burma. We know of violations of human rights waged against the political opposition and ethnic minorities, recruitment of child soldiers, political prisoners, refugees, and forced labor. We also know about the ongoing struggle between the military junta and Aung San Suu Kyi and her many house arrests. When people need an example of an undemocratic country, they will quote Burma and North Korea. US government officials have been quoted as saying the Burmese regime is the most difficult to deal with. It is easy to imagine that we know everything there is to know about the country.

In Burma I could sense such oppression in the very air of Yangon. But I also encountered some unexpected things that we don’t normally think about when we think of Burma. We know that we do have something to teach the Burmese state. But is there something the Burmese people have to teach us?

The boys running the stall in Yangon who sold me a peanut salad returned more change than they owed me when they couldn’t find the correct amount. It was immediately clear profit wasn’t the prime motivation for running their stall. 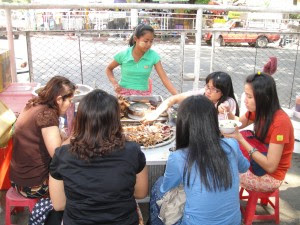 And this become even clearer night after night when walking through the streets of Yangon, darkened by the electricity blackouts, I saw groups of people drinking tea and chatting convivially on the pavements.

People had an approach to life that hinged more on community ties than on capitalistic transactions. The Internet was not easily available. Ironically, government censorship and control seems to have led to a cut-down in electronic chatter and to the “Joy of Quiet” that Pico Iyer wrote about in the New York Times last week. Please note that I do not endorse government control of media — I am merely observing, from my anthropological background, an unexpected side effect. 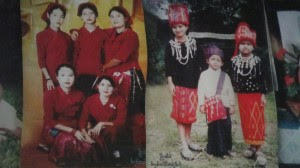 One man told me that Burma was the safest country on earth, and I didn’t have to fear being robbed anywhere. And I could believe him. People can walk around loaded with stacks of notes but nobody would dare rob them because first people are not greedy (true) and second, everyone is under surveillance (also true). I am certain that round-the-clock community surveillance is not the way I would want to live my life—but a tangible sense of “something else” happening was present where money played a less central role, and community played a larger role in social encounters. 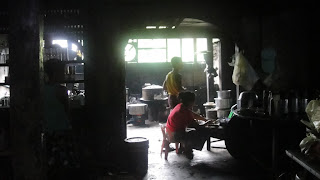 I gathered from conversations with the Gorkhalis in Burma, whose families migrated there over a century ago, that they rather liked the country and would never return to Nepal. The reason, as one woman put it, was that they did not like the individualistic life in Nepal where people only cared about their own welfare.

“When someone dies in Burma, everybody gathers,” one woman told me. “Even the Muslim neighbours come. I was visiting my cousin in Kathmandu and an old woman died in the house in front of hers. Nobody knew about it. Nobody gathered for the funeral.”

Community life, which enveloped me as soon as I stepped off the plane, is the central focus of people’s lives. Unlike other countries where individuals and couples in nuclear families are financially responsible for their own units, Burma has larger family networks that co-operate financially. 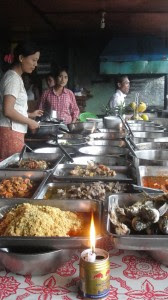 In America, people carry an ever-present sense of fear around with them that the capitalist rug under their feet could be pulled out from under them at any moment. Once that rug is gone, everyone is on their own. The state provides support to those who need help — but despite the billions purportedly spent on Medicare and welfare, the 45 million poor people in America who are unemployed or on low income appear to suffer from a chronic lack of healthy food, education, mental health, and hope. They – and especially African-American men – are also targeted by a highly racialized and commercialized prison-industry complex.

The people in Burma are poor as well — AUSAID estimates that one third of Burma’s 50 million live in poverty. Some older people in Yangon looked close to starvation. Emma Larkin, of “Finding George Orwell in Burma” fame, writes about this lack of spending power among the urban residents of Yangon, and how poverty deprives them of food. But in Myitkyina, the northern part of Burma where there is a large Nepali community, I got the sense that the people of all ethnicities whom I met were prosperous entrepreneurs, working on small businesses or farm owners. In the bazzar $2 bought me a meal of rice, fish, meat, salad with a molasses sweet. While pockets of Burmese, including the Chin, suffer food deprivation, other parts seem to do well on food that I would categorize as healthier than that found in transnational fast food outlets. 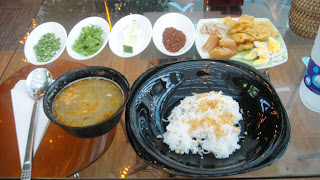 In Mandalay, I found the center of the Gorkhali Myanmar Hindu Sangh. This is the umbrella organization of people of Nepali origin. Because they came as Gurkha soldiers, they call themselves “Gorkhali” in Myanmar. The organization has built a “dharmashala,” a pilgrims’ resting place, where educational, cultural and medical support was offered. The sense of service to the community was present everywhere. A visit to the doctor led me into a fascinating apartment where a jolly man was using his floor as his doctor’s surgery. He lacked medical equipment but clearly his priority was healing – not peddling pharmaceuticals. This throwback to the old-fashioned doctor who serves the community, which in these days of managed healthcare we can read about only in books, came as a pleasant surprise.

So is Burma not such a monolithic story, after all? Are there old forms of social relations left intact in Burma from which the Greater We can also learn? Are there vital elements of community life that we have lost in our frenzied quest for money and modernization? Perhaps before everyone goes down the glossy road of globalization, we can also learn some lessons from the Burmese people.

For the linked article, go to:
Future Challenges website, Bertelsmann Stiftung
http://futurechallenges.org/local/what-we-can-learn-from-burma/
Posted by Sushma Joshi at 11:34 AM 5 comments:

I was in Bangkok last mid-April when it started to pour heavily with rain. I was in Sukumvit Road, the heart of the commercial district. Trying to walk to my hotel, I found that my road quickly flooded with rain within a few hours. I returned to Kathmandu, and followed with anxious trepidation news of the flooding in Thailand via Twitter and Facebook. 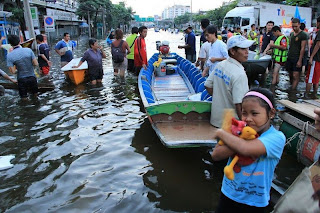 The stories of old people guarding their small homes by the river banks worried me. I emailed my friends to find out if they were okay. One had fled her home with her parents, an elderly aunt and two dogs. Another friend told me the bottom floor of her parents’ house, close to the airport, had been flooded. The damage to the city seems immense.

And yet, isn’t water a precious commodity, one we should celebrate if we get more of it? I learnt from a Thai animation made by volunteers to inform the general public that the reasons for the flooding were the artificial barriers constructed to dam the flow of water from the highlands down to the sea, as well as deforestation. With no trees to absorb excess rain water, the waters swelled as they moved towards the city.

As a child, I dreamt of Bangkok as a beautiful city filled with lights, flowered decorations and beautiful women in yellow and red silk clothes. But when I actually went to live there, what hit me was the unlimited amount of concrete, heat and noise. 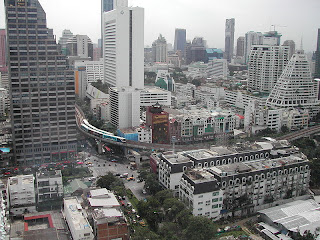 The noise would rise at midnight to my 8th floor room, a high whine from aerodynamic motorcycles ridden by young men with little regard for speed limits. The noise was unbearable. I longed for spaces with greenery and wooden buildings, the kind advertised in Thai magazines. But those had long since been cut down or taken apart. Perhaps my disillusionment at a city in which urban planners had paid so little heed to green trees and natural building materials was also linked to the water issue—a methodical respect for natural environments, as we see in some European cities, would have incorporated water not just as a side issue but as a central part of the city’s identity.

People told me that many traditional canals, or khlongs, that once crisscrossed Bangkok and were a natural pathway for the rainwater to make its way out to sea, had become disused or closed off. At one time there were so many canals that Bangkok was nicknamed “The Venice of the East.” The canals also acted as thriving marketplaces for “floating markets.” 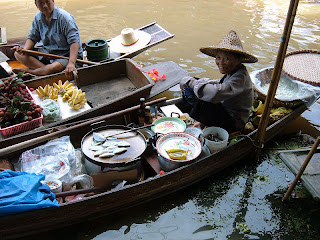 Sadly, few of these canals still remain—they were filled in and turned into asphalted streets and those that remain are not adequately maintained. Properly managed, the city could take this bounty of water and use it to replenish its canals which also act as public transport arteries for its many commuters. Maintaining the existing canals and creating new ones would certainly be a key solution for both public transport as well as a good way of stopping next year’s floods.

In his memoir “A Missionary in Siam: 1860-1870,” N.A MacDonald writes beautifully about the bamboo foundations of Thai homes build on riversides. The foundations could be moved up and down at will with two sliding pieces of bamboo, and people could adjust the foundation length as the waters rose and fell. This may be costly to do in the era of steel and concrete, but stilts can still be replicated at low cost. Architectural designs which utilize stilts – a mainstay of houses built on floodplains for thousands of years – should also be encouraged by the government to avoid the problem of flooding ground floors. Brad Pitt’s non-profit organization, Make It Right, is building modern homes on stilts, in order to combat future flooding.

If Bangkok paid more heed to its traditional urban planning heritage, where water played a central part, it would not think of water as a threat but as an asset. If there was an urban revival of this tradition of valuing water as both live-giving and nourishing, then perhaps the flooding of the rivers would be an carefully managed annual event rather than a disaster. Then perhaps the women wrapped in yellow and red would return to float flower arrangements in the river once again, creating a dream city. 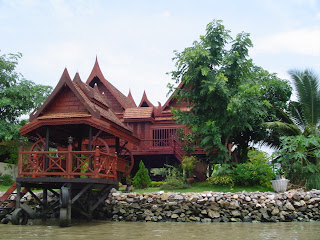 Posted by Sushma Joshi at 11:25 AM No comments: