This is yours truely...

Posted by Sushma Joshi at 3:35 PM No comments: 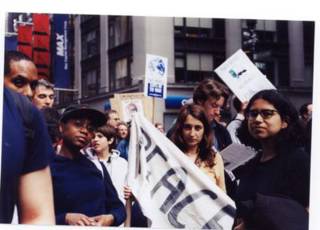 Posted by Sushma Joshi at 3:33 PM No comments:

Nader is a well-known name in American politics. Some people think of him as that pesky man who made Al Gore lose the American election in 2000. He is perceived to be a whacky, slightly eccentric character whose main concern is the environment, and whose main supporters are granola-crunching white kids with trust funds. His party is called the Green Party, which makes it sound like a pot-smoking, hippie fest in northern Oregon. He is considered to be a trouble-maker. So much so that the Nation magazine, that well-respected bastion of the liberal left, even told him not to run this time around. In other words, they told him to shut up and sit down.

The worst thing you can do in America is tell people to shut up. People hate that. They really hate it. They feel it infringes upon their deepest beliefs. People cannot be told not to run for President, even in a year where the margin is so tight that a few percentage of indecisive voters taken in by a good Green speech can make all the difference.

In a talk-fest entitled “Can We Do Better Than Anybody But Bush?“, speakers of all shades of the Left spoke about the binding dilemma -- George Bush may not be their top candidate to run the American economy, but neither is Kerry. Kerry has promised that he will increase troops in Iraq if he gets elected. He did not vote against the Patriot Act, a hastily passed legal behemoth that takes away many of the civil liberties that Americans take for granted. In other words, many Americans who are against the war and against the Patriot Act will be voting for somebody who will not represent them when the time comes.

The progressive movement, made up of people far more concerned about the people, their health and their labor and civil rights (and from which Nader springs) are obviously not going to accept Kerry just because he comes with a blue sticker saying “Democrat.” And they’re not going to shut up and sit down.

The dilemma is an ancient one, said the old-timers. The “lesser of two evils” argument haunts every election. Jeremy Scahill, of Democracy Now!, gave a scathing review of Kerry - including his use of the military to guard the streets during convention time, which is a legal no-no. The Democrats, who were originally pro-slavery, also have a long history of invading and bombing other countries, including Clinton’s 78 days of unsanctioned bombing in the former Yugoslavia. Children in a low-income black neighbourhood burnt an effigy that had Bush’s face on one side, and Kerry’s on another. Both of them represent corporate welfare and cronyism, Scahill said.

JoAnn Wypijewski, writer of Counterpunch, took a more moderate view. The vote, she joked, is elevated to a holy height, almost like virginity in the middle ages. It will be carefully guarded and given to the appropriate suitor, nobody else. Instead of thinking of the vote as sacred, why not think of it as a purchase: “Buying Starbucks in the airport when nothing else is available? Why not think about it as replacing a faulty appliance?“ The vote is elevated to the realm of faith, but we need to bring it down to the business of everyday and not expect a perfect candidate, she argued.

Naomi Klein, best-selling author of “No Logo: Taking aim at the Brand Bullies”, took a similar take. If Bush won, she said, there would be outrage all over the world. People would wonder how Americans could allow this to happen.

Peter Camejo, Nader’s running mate who originally came from Venezuala, gave an impassioned speech with the power to change people‘s minds. Nothing is further from the truth than the public misconceptions of Nader, he said. Nader’s base is made up of African-Americans and Hispanics. In San Fransisco, Matt Gonzalez, a Green Party candidate and a Hispanic man, was leading the Mayorial race over a Democratic candidate -- and was only defeated by 5 points after incredulous Democrats rushed in Clinton and Gore for emergency aid.

“This election is going to be dominated by fear,” says Nader’s website. “The Republicans play on the fear of terrorism and the Democrats play on the fear of Bush. One of the goals of this campaign is to free voters from fear so they can vote their conscience, their interests and their dreams.” Would you vote for Mussolini because he was running against Hitler, asks Camejo, clearly challenging the audience to rethink their assumptions.

"There can be no daily democracy without daily citizenship,” says Ralph Nader. With Kerry supporting the repressive Patriot Act, he might find out rather unpleasantly that the Nader factor is more than history.

Posted by Sushma Joshi at 3:23 PM No comments: